Making her way on foot to a doctor appointment, Kare lifts Brycen over a set of stairs. Bryan must drive the family car to work early each morning, leaving Kare to plan around the midday heat as she runs errands around town pushing Brycen along in the stroller. 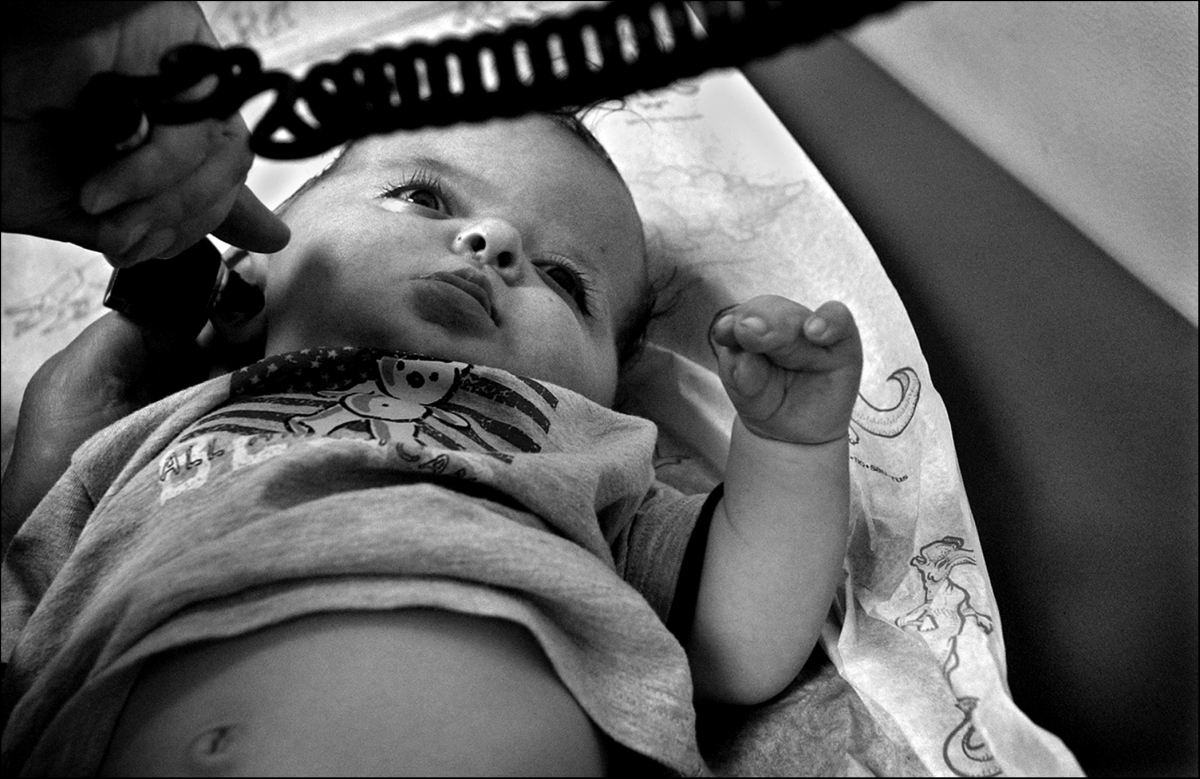 Aside from Apert syndrome, Brycen also has a cleft palate, severe respiratory problems and holes in the valves of his heart. In addition to regular scheduled trips to the doctor and countless emergency room visits, Bycen has been taken by helicopter to Children’s Hospital in St. Louis, Mo., for treatment three times since birth. He has been hospitalized with pneumonia and respiratory syncytial virus six times. He faces at least seven surgeries before age 14, and most need to be done before he turns 5.

Eight-month-old Bryson rests in the arms of his father Bryan, just days after another serious bout with pneumonia. Both Bryan and Kare were 21 when Brycen was born. Some said they were to young to care for a child with special needs. Others suggested they give Brycen up for adoption. They would have none of it. “We’re doing our damnedest to do it ourselves,” Bryan said. “That’s OUR baby, and I think we’re doing a heck of a job…a heck of a job. We love him and we’ll be there for him forever.”

Four-year-old Quintet covers his ears as his brother Brycen cries in the backseat of the family car as Kare drives around town seeking help from area business owners for an upcoming benefit to assist with Brycen’s mounting medical expenses. The family is struggling to keep their car after it was nearly repossessed when they couldn’t afford to make the monthly payments.

As Bryan eats dinner after returning home from work, he and Kare discuss financial concerns, while Brycen sits on his mother’s lap. “We spend a lot of time talking about who we owe and who we can afford to pay today,” Bryan said. Though Bryan works full-time, medical expenses related to Brycen’s care for Apert syndrome have strained the couple’s ability to keep up with their bills.

In the living room at his home, Brycen inhales a fine mist of medication from a tube. His mother is administering one of six daily nebulizer treatments to help battle the constant upper-respiratory infections he suffers from. Apert syndrome affects about one in every 100,000 babies. A child with the condition has a premature fusion of the plates in the skull, restricting brain growth and causing increased pressure in the brain as it grows. The head appears larger than other children’s and the midface appears sunken. Apert’s children also have fused fingers and toes, which can be corrected with surgery.

After a typical day of household chores, caring for Brycen and cooking dinner for her family, Kare gives Brycen his nightly bath. “It’s getting really stressful,” Kare says. “It’s hard at times even coming up with diaper money. But I believe in the Lord and felt that He gives special babies to special people, and He won’t give you what you can’t handle.”

Giving him hugs and kisses, Kare and Bryan spend time cuddling and playing with Brycen in their bedroom before turning in for the night.